For live and premium content, sign up for our email newsletter and we'll send reports directly to your inbox

Reader Michael Cembalest has sent us another one of his detailed and informative reports, this time on a little known tarpon hotspot off the northwestern coast of Trinidad. Here’s what he had to say about his experiences there:

Before this summer, I had caught only a handful of tarpon. Some in the estuaries of Puerto Rico and couple near the Bahia Honda bridge in the Florida Keys. However, most of my tarpon trips involved a lot more sightings than hooked fish, and on several occasions, schools of tarpon would swim below the boat, oblivious to lures, live baits and flies. I wanted to experience a tarpon fishing hotspot in a beautiful, isolated location. After doing some research, I honed in on Bocas del Dragon in Trinidad, which has some of the best tarpon fishing in the world. I went first in July to fish by boat, and then again in October to fish by kayak.

Trinidad has its fair share of security issues like many islands in the Caribbean, but Jonathan de la Rosa of Monsta Tarpon offers an experience in a quiet, tranquil part of the country that is far from crowds and large cities. After being picked up at the airport, we first took a one-hour van ride to Chaguaramas in Western Trinidad, and then our group of four took the 5-minute boat ride over to Gaspar Grande Island where Jonathan and his family own a private villa that they rent to fishing guests. One open-air building houses the kitchen and dining area, and the other building has three bedrooms and a living room. Our group of four enjoyed the villa, although to be clear, there’s not much do once you’re on the island other than read, relax and enjoy the view. The island has no roads or walking paths; all the private homes are built on the edge of the island, and require boats for transportation. Fresh water and electricity are available via pipeline from the mainland, there’s hot water in the showers and air conditioning in each bedroom. We enjoyed the food, which consisted of local fish, chicken and pork recipes as well as some hearty breakfasts each day.

Jonathan fishes both outgoing and incoming tides in Bocas del Dragon–the channels around the uninhabited islands west of Chaguaramas. The steep cliffs and rock formations on the islands make for some beautiful scenery while you slowly drift through the channel with the tide. The fishing areas are less than 15 minutes from Gaspar Grande Island. Most of the time, there were no other boats fishing, other than a couple of local fisherman hand-lining for mackerel or kingfish.   Choice of tackle is up to you: lures, live baits or flies (more on that later). We’re not really fly fisherman, so we went with live baits which we would cast near the rocky cliffs of the islands. While you often lose some tarpon on their spectacular jumps, there are no bridges and little structure in these channels on which fish can cut your line. Water depths range from 40 to 100 feet, and for the most part, there are few underwater rock formations to worry about.

The first day was a little windy, but we were able to land 8 of 16 fish, all in the 15 to 35 pound range.   You can’t “horse” these fish like you would with a billfish, tuna or trevally, since you would risk pulling the hook out of the tarpon’s mouth, particularly on light tackle. Patience is key, since tarpon will surface multiple times during the fight for oxygen, regain stamina and go on another line-screaming run.

Eight tarpon would have been a spectacular day anywhere else, but in Trinidad, it was a little below average for July. On the second day, we went out at 6:30 am and when we got to the fishing grounds, there were tarpon busting the surface. The action was immediate: we cast into the school, after which several tarpon attacked our baits and leapt into the air. We landed 10 tarpon in the morning and another 5 in the afternoon (after a 4-hour break for lunch). One of the afternoon tarpon was an 80 or 90-pound bruiser that I fought for almost 45 minutes; we were able to leader it, but it shook off right as we were going to take pictures. The by-catch included 10-20 pound jack crevalles, small groupers and some beautiful African pompanos.

The third day was more of the same fantastic fishing: we landed 20 tarpon in the morning before we had to head to the airport at lunchtime for the flight home. The action was non-stop, and one of the last fish of the day was a 70-pound tarpon that was another great fight. After leadering the fish at the boat, I jumped into the ocean to take photos before releasing it.   One of the other benefits of Bocas del Dragon: despite the ominous sounding name, there are few sharks to worry about. The final tally was 43 tarpon caught, and that’s with 2 adults and 1 child fishing for 2.5 days, since my wife didn’t really fish (she was our wildlife photographer).  We landed around 70% of the fish we hooked into. 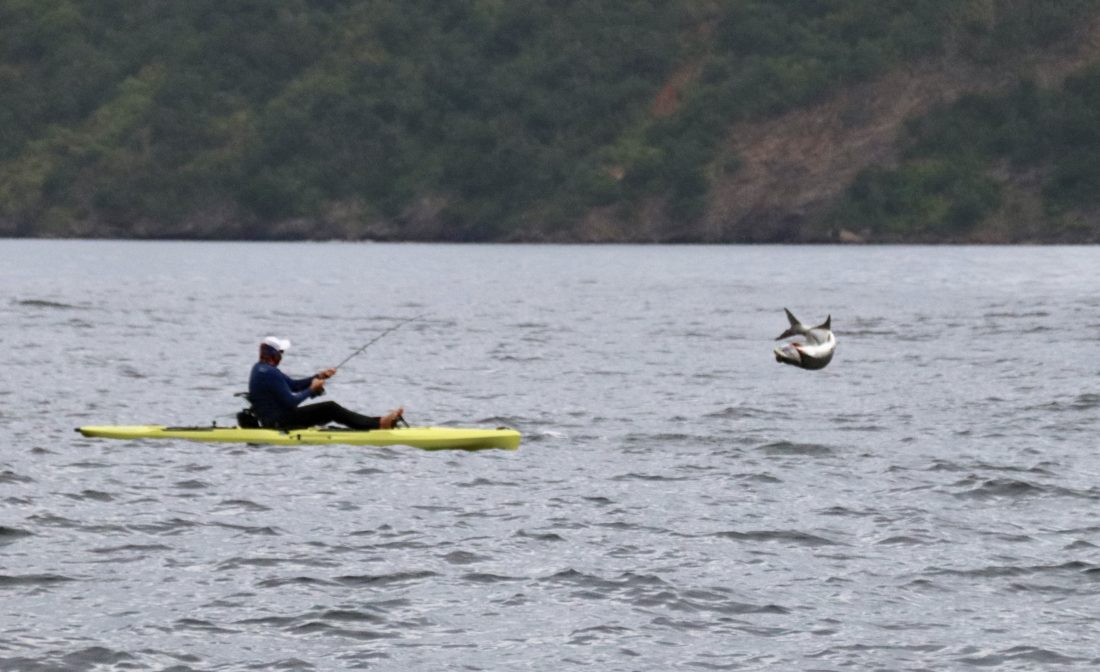 As an avid kayak fisherman, I immediately recognized that Trinidad would be a fantastic opportunity to kayak fish for tarpon, which is something I had always wanted to try. However, there are no Hobie kayaks to be found in Trinidad, and no Hobie dealers I could find in the Caribbean.   So, I bought a pedal-drive Hobie Mirage Outback online, had it delivered to a shipping company, had it transferred by containership to Trinidad, arranged for customs brokers to handle the importation and duties, and had it delivered to Jonathan’s villa on Gaspar Grande. The entire process took about 6 weeks, but it was well worth the effort since I had the trip of a lifetime. On kayak, I have caught yellowtail, sailfish, striped bass, bluefish, redfish and small roosterfish, but the massive tarpon of Bocas del Dragon were something different altogether.

My friend Sloan and I returned to Trinidad for a second trip this past October, and I fished in the kayak while Sloan fished in the boat with Jonathan. Rules of engagement: the mothership could chase down fish that Sloan was fighting, but they always had to stay within a half-mile line of sight of my kayak (a rule they only abrogated once). Within 10 minutes on the first morning of a 2 and a half day trip, Sloan caught his first tarpon, and I hooked into one that was somewhere between 80 and 100 pounds. The jumps were incredible, and for 45 minutes, it towed me around the channel while I gradually gained ground on it, being careful to always keep the fish in front of the kayak and not to the side. Hobie kayaks are very stable, but a large fish combined with some wicked rips and eddies can create problems. I eventually leadered the fish at the side of the kayak, and hoisted it up onto my lap for a quick photo before returning it to ocean (there’s an accompanying video on the Angling Report website with some great footage). After another couple of fish, I noticed that the fish we were catching were much bigger than in July. Over 2.5 days, Sloan and I ended up catching around 30 tarpon, many of which were over 40 pounds, including 3 or 4 around the 100-pound level. I plan on returning each year, since for a kayak fisherman, I cannot imagine an experience more exhilarating than this.  Drifting and pedaling around the giant uninhabited islands in search of massive tarpon was a joy by itself. 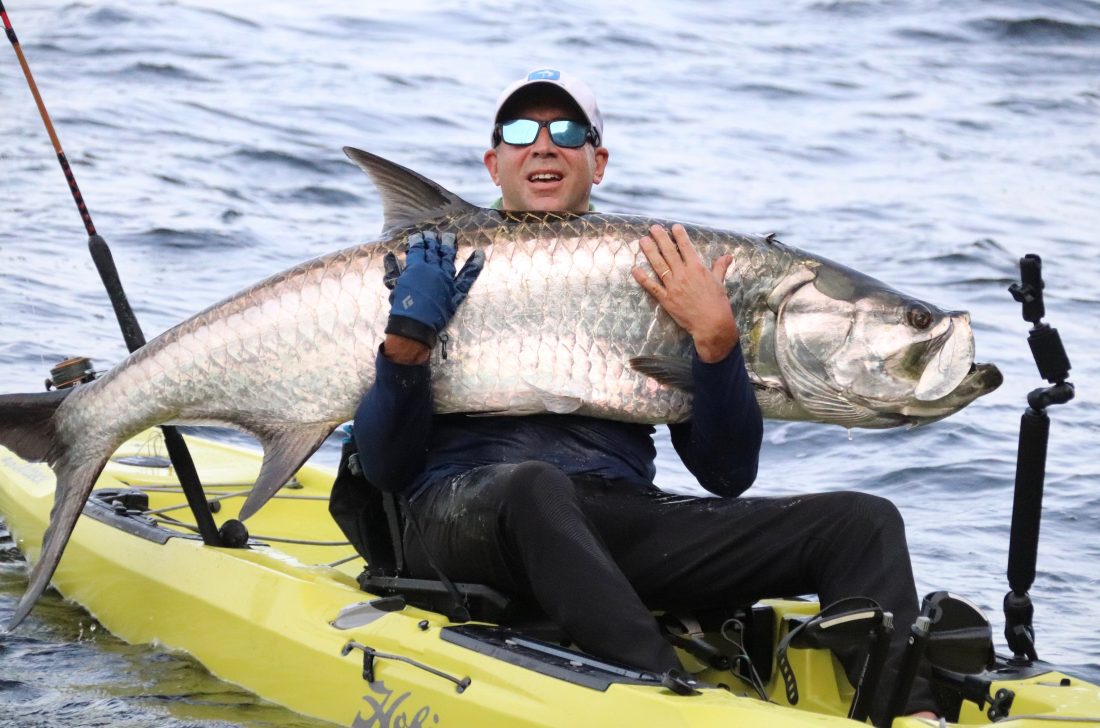 According to Jonathan, Trinidad is one of the best fly fishing destinations for tarpon. He hosted several fly fishing groups this year, and each fisherman tends to get 6-10 shots (eats) per day. During one morning feeding blitz, 10 tarpon were landed on his boat in one hour. Most tarpon landed on fly range from 15 to 30 pounds, with a few in the 40 to 50 pound range. Jonathan recommends bringing multiple 12-13 weight rods with sinking lines. Some fly fishermen use intermediate lines with 15 feet or so of 500 gram line at the end for easier casting. Flies range from 3 to 8 inches long, and are meant to mimic shads and minnows. The fishing is a mix of sight casting when the fish are on the surface, and blind casting towards the cliffs and eddy pools when they aren’t. Jonathan will answer any fly fishing related questions you have via email, and recommends looking at his Instagram site to see documentation of recent fly fishing trips.

In October, Sloan and I stayed at the Crews Inn. It is a passable marina hotel for a fishing trip. The air conditioning and Wi-Fi work fine, and there is a Café/Restaurant with typical marina food. To be clear, a trip to this part of Trinidad is just about the fishing. Jonathan and his mate Fernando are excellent company, extremely knowledgeable and worked non-stop to put us on fish. They take amazing high-res photos during the action, and email them to you by the end of the day. The tarpon season in Trinidad lasts from May to December, with the best months from July through November. For tarpon fisherman looking for a fishing-intensive experience and who don’t need any complementary activities for themselves or their other guests, this trip is highly recommended.